At the end of April, I had the pleasure to visit the Section for Media History at Lund University for a week that turned into a veritable (unofficial) EMHIS festival or jamboree. Several EMHIS members were gathered in Lund to discuss audiovisual archives, transnational media history and digital methods.

Alec Badenoch (Utrecht University/ Vrije Universiteit Amsterdam) spent two weeks in Lund with funding from the Sound Environment Centre. He gave talks about two exciting projects he leads as the Professor of Transnational Media endowed by the Netherlands Institute for Sound and Vision. The first talk, “Experimental Media Archaeology and Audiovisual Production” asked how to archive analogue audiovisual media in a way that would enable access to the embodied experience of analogue media production. In particular, this project works with artists to find out how archives could better serve their needs. Experimental media archaeology serves here as a method to investigate ways of accessing the experience of analogue media production.

Alec’s second talk, “Sound, Images and Postcolonial Archives: Polyvocal Interpretations” addressed the important theme of decolonizing audiovisual archives. The aim of this research project is to design a postcolonial archival interface that enables the critical examination of Dutch colonial history. The talk raised questions such as how to deal with racist terms in old metadata and how to frame archive material from the colonial era in a way that creates productive alienation for the user. Both projects showcase The Netherlands Institute for Sound and Vision’s commitment to making audiovisual archives accessible, developing research collaboration with universities and critically examining archiving practices.

Also visiting Lund was Helle Strandgaard Jensen (Aarhus University). Together with Betto van Waarden, Helle gave a seminar on digital history located at the Department of History, which I was sorry to miss due to arriving in Lund too late. Another seminar focused on the history of children’s television: I got to discuss my on-going research on Finnish 1970s and 1980s preschool television programmes while Helle presented her book Selling Sesame Street, which will be published by Oxford University Press later this year. In her book, Helle challenges the “official history” of Sesame Street which claims that the show’s international success was due simply to its quality and broad appeal. Using a global history approach, she shows that the producers of Sesame Street in fact marketed the programme aggressively in Europe and Latin America. Despite its non-commercial branding in the US, Sesame Street became a commercial predator in the international television marketplace.

After two years of online events, it was a real treat to spend a beautiful spring week in Lund, with days filled with lively discussion, shared meals and afternoon fika. The week really made me realize what we have missed out on during the pandemic. The Media History section in Lund made a great impression with its warm and collegial atmosphere. Many, many thanks to Marie Cronqvist and all the colleagues at Media History for an inspiring week! 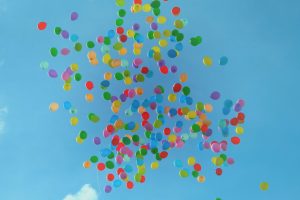 Photo by Luca Upper on Unsplash