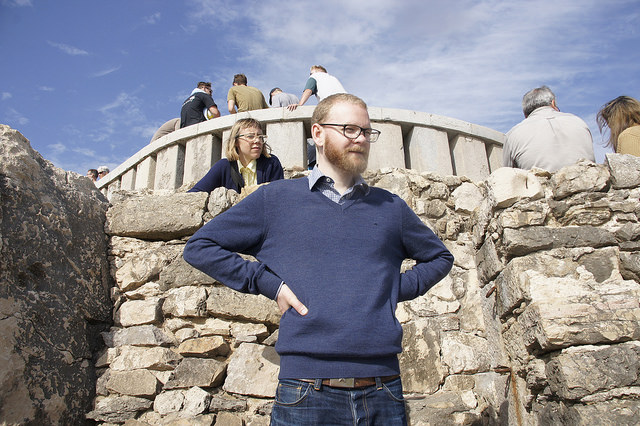 Following on the format of EMHIS V in Häckeberga, Sweden, EMHIS VI brought network members together to review works in progress, which in turn stimulated further discussions on entanglement, plans for publication of this research, and the future of EMHIS. In addition, two guest speakers, Dr Nelson Ribiero and Professor Bridget Griffen-Foley, joined the discussions, and were subsequently invited to join EMHIS. The venue for the forum, the Pousada Hotel in Cascais, Portugal, provided a stimulating environment, along with lovely views. Based in a former fort with spectacular views of the coastline, the hotel and its attentive staff helped all feel welcome.

In addition to discussing papers by members Johan Jarlbrink, Katy Homden, Kerstin Stutterheim, and Hugh Chignell and Kate Terkanian, the two invited speakers presented fascinating talks. On Wednesday, Dr Nelson Ribiero discussed Portugese Radio, both from the policy perspective during the years of the Salazar dictatorship, and from the establishment of a successful private network in Mozambique, Clube Mozambique. Although initially suggesting that this research was neither transnational nor transmedial, the content of the discussion clearly demonstrated the transnational strain of Clube Mozambique with its commercial English-language channel popular in South Africa, and its establishment of programming in native languages. The talk also highlighted how the network in Mozambique, although privately run, received state license fees to finance the non-commercial Portuguese programming. Dr Ribiero was able to join the group for both days of the forum, and his participation was greatly appreciated.

Our second guest speaker, Professor Bridget Griffen-Foley, joined EMHIS in Portugal on her way to a visit with Hans-Ulrich Wagner at the Hans-Bredow-Institute. As the director of the Centre for Media History at Macquarie University in Sydney, Australia, Dr Griffen-Foley has established a link with the Hans-Bredow-Institute which included a recent extended visit to Australia by Dr Wagner. In addition to highlighting the work and research activities of the Centre for Media History at Macquarie, Dr Griffen-Foley provided an overview of her research activity by detailing several different projects that demonstrate the entangled nature of her research. First she discussed her research on Australian journalists working in London on Fleet Street, and the long-standing journalistic connections between the two countries. The development of commercial radio in Australia was also examined, especially in terms of how Australian broadcasting blended both British public service and American commercial methods. Building on these comparisons, Dr Griffen-Foley demonstrated how the Fireside Chats of US President Franklin Roosevelt, as well as the broadcasting efforts of his wife Eleanor, provided a successful model for Australian politicians.

The hotel provided delicious meals in the Taberna da Praça, offering stiff competition to those at Häckeberga. Due to the gorgeous weather and the long days, we were able to enjoy the spectacular coastline and catch more than enough sunshine. Many of the museums were open until well into the evening, and some EMHIS members were also able to spend a free hour wandering around the colourful streets of Cascais. A replica 18th Century Russian frigate, the Shtandart, even sailed into the marina on its way to Rochefort in France. EMHIS VII is scheduled for 29 November to 2 December in Bournemouth. Although we’re not expecting warm, sunny beaches or Russian frigates, there is bound to be fruitful collaboration and a convivial atmosphere.