Tuesday 8 May 1945, is widely known as Victory in Europe (VE) Day. Although the Second World War officially came to an end, not all Europeans celebrated the date. 8 May was experienced differently by people all over Europe. Most of them coped with everyday problems depending on the various situations they lived in: as a soldier of the German Wehrmacht or the Allied troops, as a housewife preparing a meal or living in an emergency shelter, as a survivor of the Holocaust in one of the liberated concentration camps or as a perpetrator who stood accused. Without personal documents we can only imagine what might have shaped people’s experiences of this day. But as far media coverage has been preserved, we can at least analyse what these people were told by the media of the time: reports by newspapers and the radio, news by broadsheets and loudspeakers that marked the end of the war. Of course, facts about the acceptance of the unconditional surrender of Germany’s armed forces by the Allies were inextricably interwoven with interpretations of what this event should mean for the contemporary readers, listeners and bystanders.

This is the second of three blog entries about the sonic traces of May 1945 in Britain, Germany and Sweden (authors Hugh Chignell, Hans-Ulrich Wagner and Marie Cronqvist) and the messages given by radio to the people who got in contact with them. They are radio sources from a victor, a loser, and a neutral. We consider such documents as relics of communicative processes in the past. This means that we consider them sources of past speaking and writing while looking for traces of past listening and reading historians lack so often.

In neutral Sweden, the liberation of “Norden” was an overarching theme on radio from 7 to 9 May 1945 – in broadcast speeches, radio reports and news bulletins. ”It feels like a long nightmare has finally released its grip and we can breathe again”, said prime minister Per Albin Hansson in his first radio speech shortly after the German surrender on 7 May. “Even if we Swedes have not been directly involved in the battle, we still realize what this means for our country and our people.” He emphasized the unyielding Nordic spirit and the joy that the Swedish people felt about their brothers and neighbours. That Sweden has managed to keep neutral and successfully avoid the lines of battle was not, Hansson stressed, a matter to boast about but instead a strike of good luck to be humbly grateful for.

Among the perhaps most emotional audio clips that can be found in the audio archive are a couple of recordings focusing merely on city sounds from Kungsgatan in Stockholm on the same day, 7 of May. In one of them, reporter Gunnar Helén stood on the roof of a garbage truck describing to the listener the spectacular visual scene before him: waving hands and flags, traffic jam, and confetti, office papers and paper streamers thrown from the windows. On the recording we hear people cheering, and an incessant sounding of car horns and laughter. After a while, someone takes up singing the Danish national anthem and others quickly join in. Then the singing crowd gets bigger continuing with the Norwegian and finally the Swedish anthems. Happy people on the street, both Danes, Norwegians and Swedes, are interviewed.

Gunnar Helén reporting from the festivities at Kungsgatan in Stockholm 7 May, 1945 (source: Sveriges Radio) 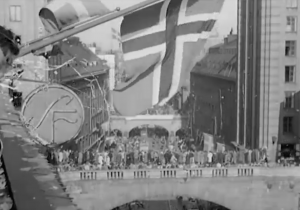 The Nordic theme was followed up on 8 May, when Hansson spoke again to cheering crowds in the central park Vasaparken in Stockholm. He was joined by Norwegian Labour party politician Lars Evensen, a member of the resistance movement (Hjemmefronten) and during the war in exile working at the Norwegian legation in Stockholm. “You can say that Norden has never been more alive with the Swedes,” Hansson stated, “than during these last few years. With every fibre in our body, we have felt with our brothers and sisters in Norway and Denmark.”

Among the remaining audio clips is also a travel report from 9 May by legendary radio reporter and host Sven Jerring about a brief undercover visit to Copenhagen shortly before the German surrender. Jerring tells the listener about an accidental but fortunate meeting on the street with a Danish colleague, who travelled around with his radio equipment on a trailer. The two reporters joined forces, and in Jerring’s report, the whole anecdote serves as an illustration not only of the unity and cooperation between the Nordic countries. It also forcefully reproduced what Nick Couldry has called “the myth of the mediated centre”, putting broadcast radio in the centre of world events.