EMHIS members with an interest in British media often need to use the national library of the United Kingdom based near St. Pancras station in London.

For some media historians, like me, it is the most important media archive but it is always changing and keeping up to date is quite a challenge.

I recently spent some time with one of the most experienced curators at the BL and learned a lot which might interest EMHIS colleagues.

The BBC Transcription Service provided edited recordings of radio programmes for BBC operations around the world.  This is a huge and largely unknown collection of recorded sound containing some critically important recordings mainly from the 1950s onwards.  The BL has an almost complete Transcription Service collection and this has now been digitised, amounting to almost 10 terabytes of data.  It will take a while for a spreadsheet of the file names to be produced but this could be an important new resource for some of us.

All BBC radio newscripts have now been digitised.  That includes several different new bulletins for every day I assume from the late 1920s. Some of these will be put onto the BBC Genome, probably one news script per day. This is another extremely important resource for entangled media historians allowing us to read the news reports as they would have been heard in the last century.

If I find out any more I will let you know and do contact me if you want more information. 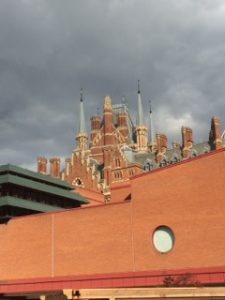